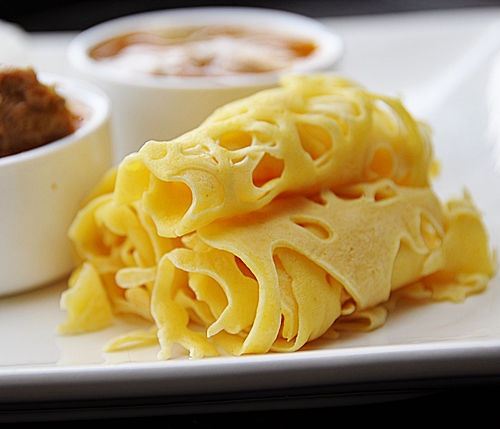 The literal translation of roti jala is “net bread” in Malay. Since they do not look anything like bread (well, at least the ones that we’re all accustomed to), calling them “net crepes” is more appropriate. One might ask why go through all the trouble of making the crepes lacy? I used to have the same thought so I have made the conventional crepes instead. And the result was not awful but not great. Somehow having a solid piece of crepe with coconut and turmeric flavouring  can be overpowering, so I deduce by making the crepes lacy will actually ease their richness in flavour. 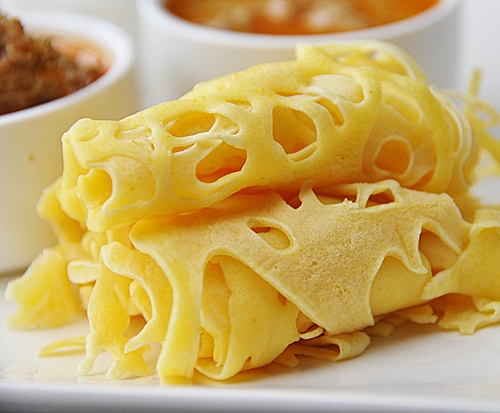 Sometimes I think roti jalas are only meant for Malaysian Chicken Curry. How could I possibly have this curry without these  delicious crepes?  Maybe I have exaggerated a little but I do believe curry and crepes belong to each other. Not only the latter look seductive on a plate, they are addictive when used to mop up curry sauce.  You can say that it is my acquired taste from childhood but I think one should give this recipe a go before discounting it to a lookbook. 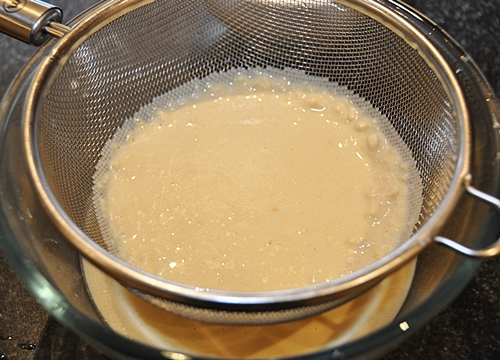 {Need to strain the roti jala batter through a sieve to remove the lumpy bits from blocking the tunnels of roti jala mould. See how tiny the tunnels are?} 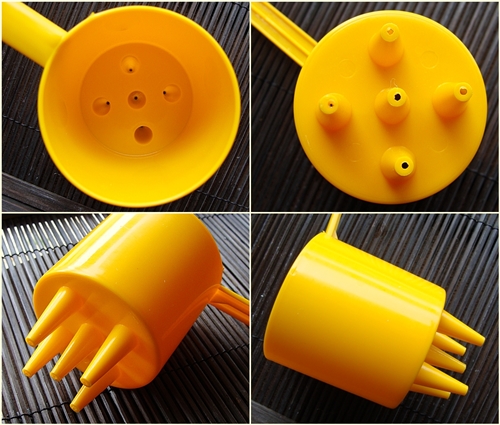 3. Stir in coconut-egg mixture gradually and mix until a thin “crepe-like batter” is achieved.

4. Strain the batter through a fine sieve.

5. On med-low heat, grease and heat a griddle or a medium sized non-stick pan.

6. Put a ladleful of better into a roti jala mould/cup and in a circular motion, form a thin lacy pattern in the pan [about 8 inch in diameter].

7. Cook until set, turn over onto a plate. [There is no need to cook the other side].

8. Fold each crepe into quarters, staking them up as you go.

9. As you make the crepes, grease the pan. [Add a little water to the batter if it becomes too thick]

(Emily’s note: If you don’t have coconut milk on hand, you can substitute 2 cups of coconut milk and 1 cup of water to 3 cups of milk. When I made these (photos above), I’ve used milk instead. Also, rather to grease the pan every so often, I’ve added about 3 tbsp of vegetable oil. I have only greased the pan before the first crepe and subsequently the oil in the batter did the job for me.)

So, what if you don’t have a roti jala mould?

Here are some ideas to create a lacy crepe without the gadget:-

Using a hammer and 0.2 inch nail, make 5 or 6 holes. Make sure the holes are evenly spaced on the bottom of  the can.

Hammer out any sharp edges.

(Emily’s note: If you aren’t good in hammering work like me and you are likely to end up with a few holes on your fingers instead on the tin can, then the next method is for you. :))

When you are on step 4 (refer to the methods above), run the batter through a fine sieve into a measuring cup. The pour the sieved batter from the measuring cup into the ketchup dispenser. For this purpose, you will need a medium to large sized measuring cup. 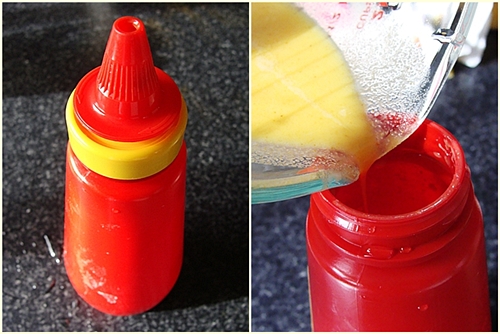 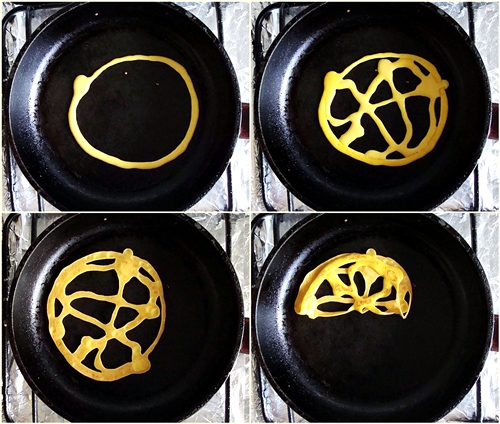 {For me this is a pretty fun process, just like a creating an abstract art on a pan. 😀  With the ketcup dispenser fully loaded with batter, first draw a circle then scribble figure eight patterns to create the lace in the circle. Make sure the patterns are not too close together. Then flip the crepe to cook on both side as this method will create a thicker laced crepes as compared to the mould. I would suggest that you first start on low heat so that the whole crepe will cook evenly as you scribble the patterns. As you become more confident, you can increase the heat as you wish.}