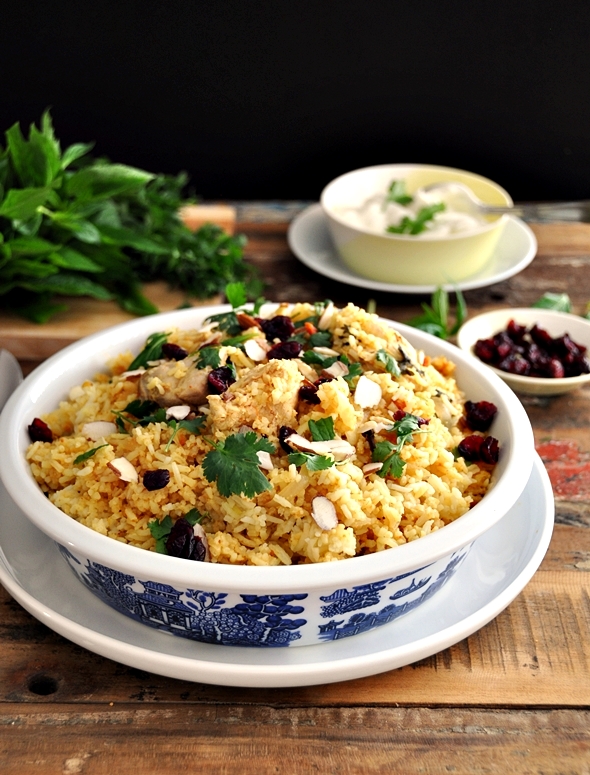 Biryani is not an ordinary one-pot rice dish. It’s rich in spices coupled with beautiful fresh herbs, toasted nuts and raisins, thus making this a meal fit for the kings, literally. It is believed that this was created in the kitchens of Mughal Emperors. Nowadays, this popular Indian sub continental dish is a party favourite.

I have seen how it was done in the kitchen by my housemate’s mother some years ago. It was somewhat laborious. She boiled the rice in a large pot until al dente (still got some bite to it) and in a separate pot, she made the gravy (with chicken) and then layer the rice and gravy in a pot (like lasagna). The rice and gravy mixture was then put back on to the stove, covered with a lid and simmer on very low heat until the gravy was well  infused into the rice.  This is without a doubt a big production. But at the same time, it’s totally worth all the effort to create this flavoursome rice dish!  😉

The part that I dread about the whole process was boiling the rice and then drained it. I’m not big on draining things i.e. the possible hot water splatter, the heaviness which strained my weak wrists etc. Tsk tsk, I’m such a drama queen! With my teeny tiny melodrama aside, I’ve worked on a solution which was cooking the rice using my trusty rice cooker. When it comes to using a rice cooker, it is all about getting the rice to water ratio right. 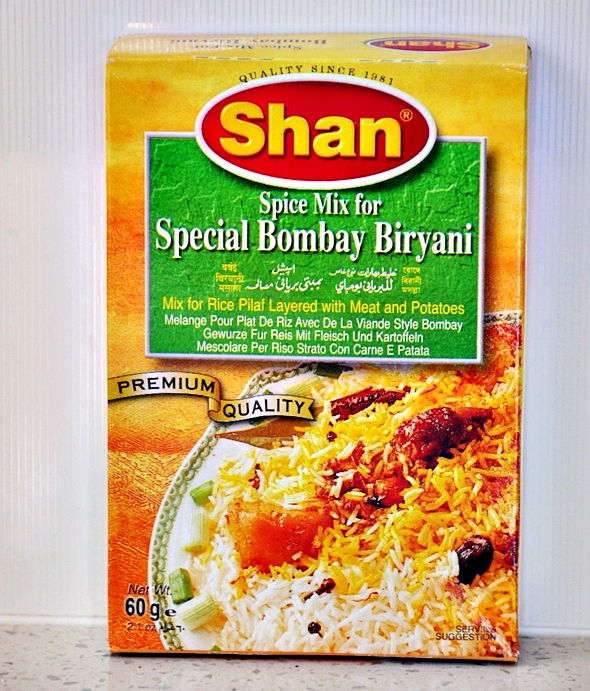 {This is the brand I used which was recommended to me by my friend’s mum. I’ve managed to buy it online here.)

Note – Be prepared for an additional 2 hours to allow the gravy to infuse the rice in the rice cooker. 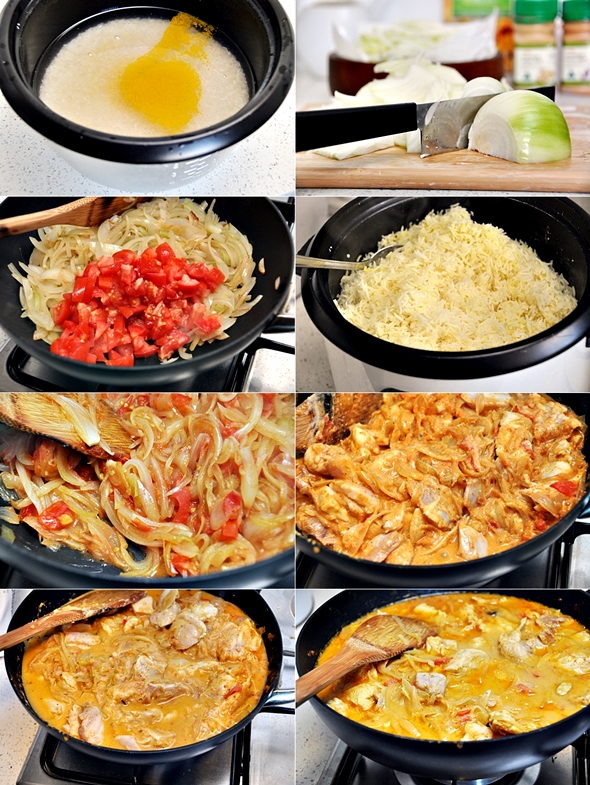 Start by rinsing the rice with water until the water becomes clear. Then in the rice cooker add 5 cups of water, turmeric powder and a teaspoon of salt. Turn on the rice cooker and allow the rice to cook. In the meantime, start prepping the ingredients i.e. slicing the onions, dicing the tomatoes and chicken. In a large pan, saute sliced onions until golden brown which will take about 4 to 5 minutes over medium-high flame. Depending on how long it’ll take you to prep the ingredients, around this time my rice was cooked. I used a big fork (the ones you’d use to serve salad) to fluff the rice to make sure it is fluffy. Set aside the rice while you continue cooking the gravy. Then add diced tomatoes and toss with the onions. Cook for another 3 to 4 minutes until the tomatoes are somewhat dissolved and become saucy. Add ginger, garlic paste, yoghurt, biryani spice mix  and chicken. Fry the mixture for 10 minutes or the chicken about 80% cooked. Add 1 cup of water and allow the mixture to simmer for 30 minutes or until the oil is separated from the gravy. Taste the curry if additional salt is required. The spice mix which I used contained salt and therefore I didn’t need any more salt.

While waiting for the gravy to cook, it will be a good time to chop the coriander and mint which some of it will be used in the layering process (see below). Save enough for the final garnishing over the rice as well as some for the yoghurt which will make an ideal accompaniment to balance the spiciness of the rice. 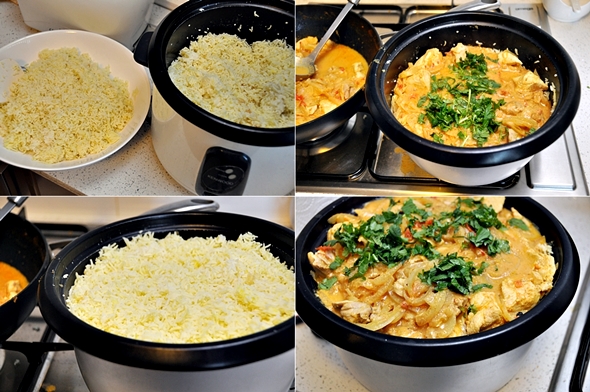 Once the gravy and rice is done, it’s time to layer them.

Transfer half of the rice into a large bowl (salad or mixing bowl). Then ladle half of the gravy onto the rice in the rice cooker and scatter some chopped herbs. Then transfer the rice from the bowl back to the rice cooker and pour the remaining gravy onto the rice. Scatter the chopped herbs again. Put the lid on and turn on the cook setting and allow the gravy to infused the rice for 1 to 2 hours (until the gravy is well absorbed into the rice). Side note: My rice cooker has only two settings (i) cook; and (ii) warm. So I started from the cook setting which will take about 20 minutes until it jumps to the warm setting. So I basically left the kitchen and tend to it after 2 hours.

To serve: Use the large fork to fluff the rice and transfer to a large serving plate. Scatter chopped herbs, almond flakes and raisins (if using) and serve with herb yoghurt.

For the herb yoghurt, I added the chopped mint and coriander, a small amount of finely chopped fresh onion and some lemon juice. Diced cucumber would make a fine addition to the yoghurt if you have some on hand. 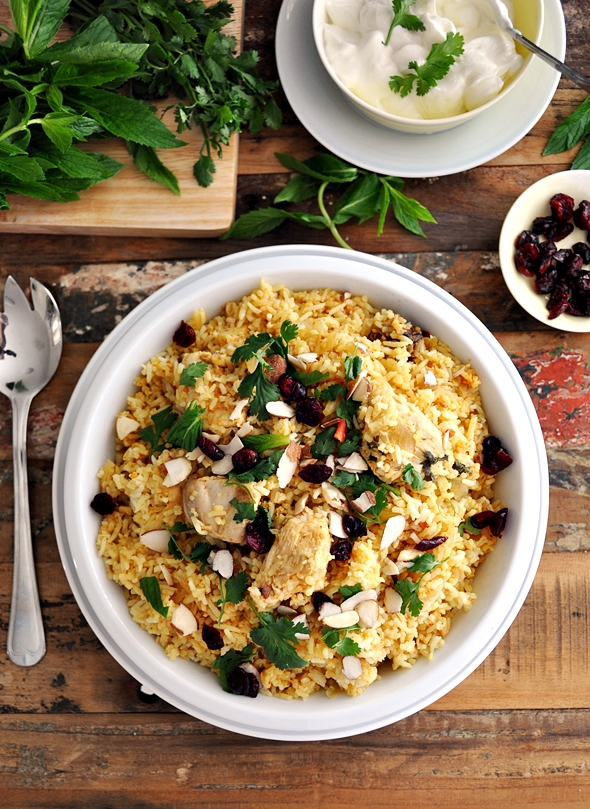