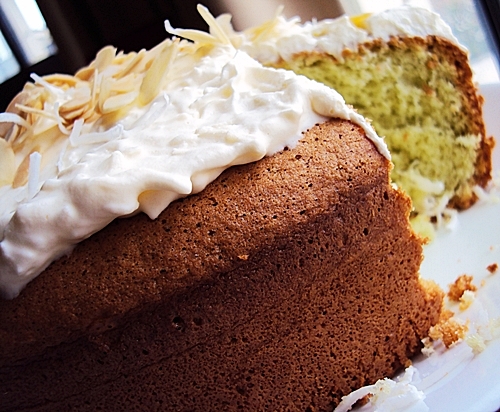 When I woke up to a refreshing and sunny autumn morning (most importantly it was my day off), I was deeply engrossed by the colors of the trees outside my house. Before moving to Orange (NSW), I have been told that this place is very beautiful and scenic especially during autumn. After a couple months residing here, I reckon the name Orange couldn’t have been more perfect for this place in autumn.  Even though I had my occasional complains about the chilly temperature at night, it’s hard to resist admiring the changing colors of leaves as I was driving around the city.

Amidst the fallen leaves and sturdy green grass, I was inspired to bake something that reflects the similar color scheme and hence the pandan sponge cake. Since young, I have a soft spot for the soft and fluffy pandan cake. Although the original recipe that I am using does create a spongy cake, I like to refine its texture further by using self-raising cake flour (this means I also cut out the baking powder in the recipe).  As for the flavoring of the cake, I’m using the pandan paste which has a rich pandan aroma and intense green coloring. Keeping in mind less is more while using the paste, I’ve only used a tiny drop in my cake or else it’ll taste very “essence-like” (you certainly don’t want that!). After all, the juice from real pandan leaves is quite subtle and doesn’t give out great green intensity. 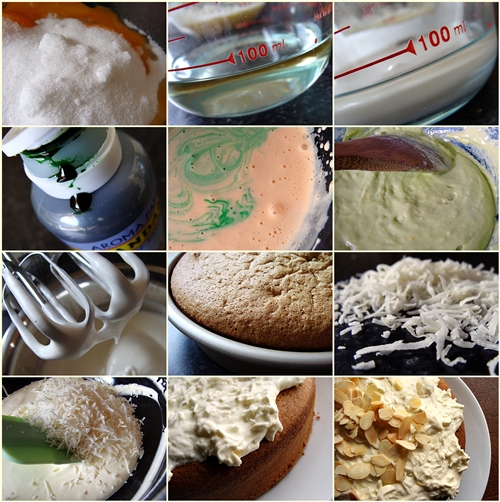 (A recipe from fuss free cooking)

A handful of toasted almond flakes for decoration

3. Cream egg yolks and sugar until the mixture is thick and pale in color.

5. Whisk egg white and cream of tartar till very stiff.  Add in sugar gradually. Whisk until the mixture holds its shape.

6. Fold in the egg yolk mixture quickly and evenly.

7. Pour the mixture into the cake mould and bake for 40 minutes. (Emily’s note:  The quantity of the batter fits perfectly on a 20cm cake tin and the tin was lightly with vegetable oil.)

8. Immediately invert the cake after removal from oven. Leave to cool.

2. Once the mixture can slightly hold its shape, fold in a handful of shredded coconut.

3. LASTLY, spread the frosting on the cake once it is completely cooled. To add a little crunch, decorate the cake by sprinkling some toasted almond flakes over the frosting.