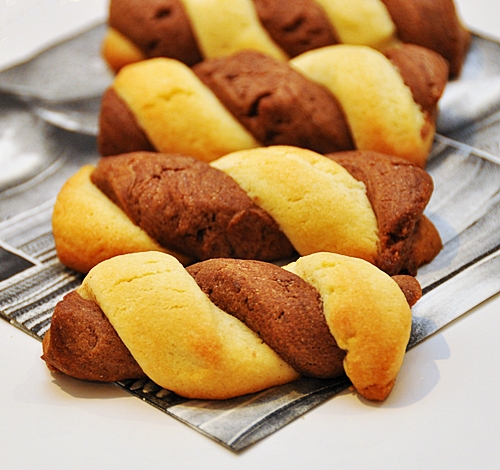 First off, how’s your weekend?

Mine was relaxing as usual, mostly catching up on blog reading, watching beauty channels on Youtube and TV shows. That said, I was planning to bake something over the weekend so that I’ve something to blog about on Monday (my blog is in serious need of breaking the curries-and-stir-fry pattern). Plus, the weather was fine – meaning  good lighting for photo-taking.

Unfortunately, the plan has gone down the drain as I end up watching the entire season of Modern Family. Oops. When it comes to TV shows, it’s like an once-you-pop-you- can’t- stop moment for me. 🙂 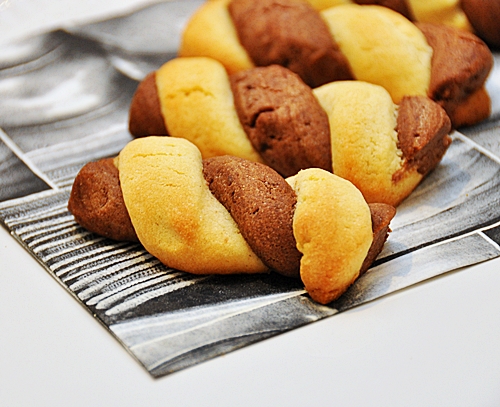 Better late than never, I have decided to partake in a light baking after work on Monday.  Not wanting to spend more than an hour fiddling around in the kitchen, I’ve found this easy recipe on mocha vanilla twists which has a  mix of my favourite flavours – vanilla, chocolate and coffee. If you have been following my blog,  you might have the feeling of deja vu – chocolate pinwheels which I’ve made a while back.

At first glance, the recipe seems feasible as the ingredients were readily available in my pantry and the listed prep & cook time is 45 minutes. Perfect.

Having said that, the whole baking is not a bed of roses as I find twisting the dough is the hardest part of the whole process. Maybe because I didn’t spend enough time playing with Play-Doh as a child! For the first batch, I didn’t twist it enough and it ended up looking like this.  When the second time around, I’ve tried to “sausage” roll the mocha and vanilla portion as small in diameter possible (longer) in order to create a tighter twist (hope this makes sense). Anyway, it doesn’t really matter, the twisting is mostly for aesthetic purpose.

Most importantly these taste really good. The instructions mention about storing the twists in an airtight container for up to a week which won’t be an issue right? 😉 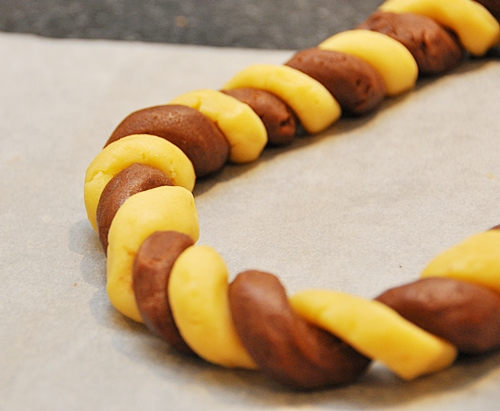 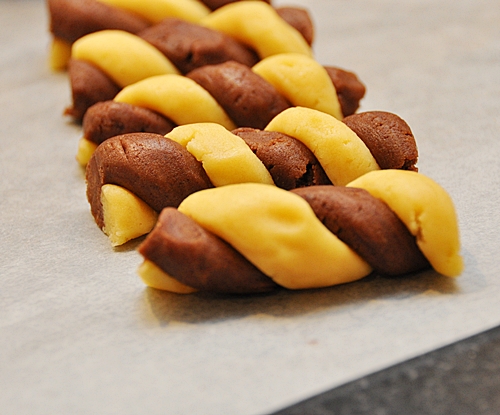 2. In a small cup, stir to combine coffee granules and boiling water. Set aside.

3. Divide dough in half. Stir in coffee mixture and sifted cocoa into one portion to make mocha dough.

4. Divide both dough portions into four equal pieces. Roll each portion into a 40cm (16 inch) sausage. Twist one plain sausage and one mocha sausage together; cut into seven 5cm (2 inch) lengths. Repeat with remaining plain and mocha dough.