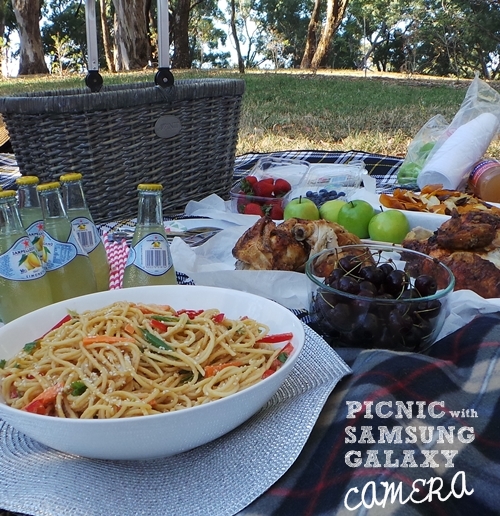 As part of Samsung’s launch of the Galaxy Camera in Australia I was invited to review and write my thoughts on this exciting new product by Samsung. Some of you may be wondering how a food blogger who predominately writes about simple recipes would be qualified to write about an unreleased (well at least here in Australia) new technology product.

Well let me tell you that this Camera is meant for people like me. With all the social networking available nowadays, I have a myriad of accounts with Instagram, Pintrest, Facebook, Google+ and probably some I’ve even forgot about (like you Tumblr! ;)) The problem is that I have to take photos, connect my camera to my computer and then upload them directly to my various social networking sites. It’s a time consuming process and there’s a lot of time wasted in duplicating my uploads. 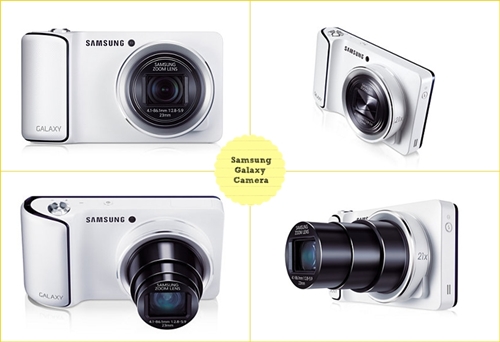 That’s where the Samsung Galaxy Camera comes in. I have to admit I was a bit skeptical about it at first. I already own a Samsung Galaxy S2 and I am familiar with Android. I don’t particularly like phone photos unless I have no choice because they just don’t seem to come out with the same quality as my normal cameras. The Galaxy Camera though is like a combination of a great point and shoot camera with the software of a phone! What this means is that you have all the power, flexibility and software that you would normally have on your phone. It runs all the Android apps that your phone does. Even better it even runs the latest version of Android (called Jellybean) that my Galaxy S2 doesn’t, and boy does it run it well!

{an overview of the surrounding using the Panoramic mode}

I thought I’d give this Camera a test by taking it out for a picnic (well it and some of my friends) at the Orange botanical gardens. I prepared cold peanut noodles for the outing which was a great choice really…you’ve got the carb, veggies as well as it is cold. Very appropriate for the summer heat at the moment. 😉 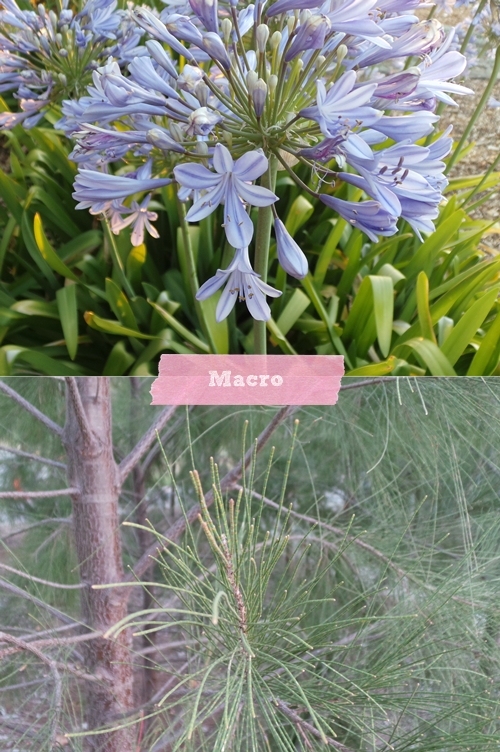 I started off by popping a sim card into the camera. My sim card had data plan. The connectivity I got on this camera was just as good as my Samsung Galaxy S2, which really impressed me. As I took pictures all my friends wanted to have a look, so I decided to try a test, and I used the MMS function of the camera and sent the pictures right to their phones! All while walking around and setting up the picnic.

The social sharing features on this camera were really great. I took pictures, and backed them up to my dropbox account, uploaded them to facebook and even emailed them to my friends. I even put a GPS app that I had on my Galaxy S2 on the camera and briefly used it for directions to a friends house. I could also check my email, all while looking for the perfect pictures. It was great that I could be connected to my friends and family as well as the internet and my website while taking pictures, and unlike my phone camera this camera had a really great zoom function. Take a look at some of the pictures of this bird I got, which was approximately 10 metres away from our table. 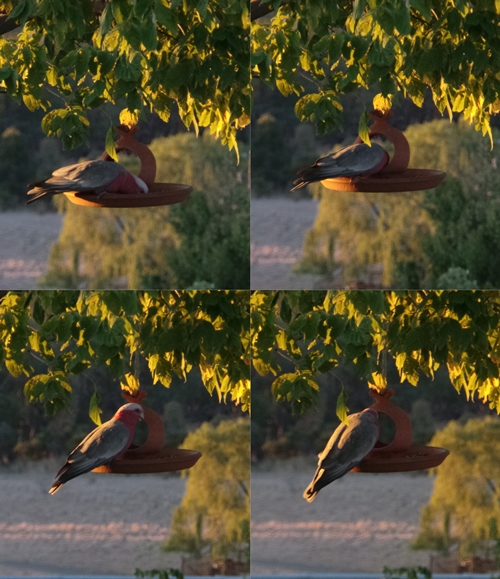 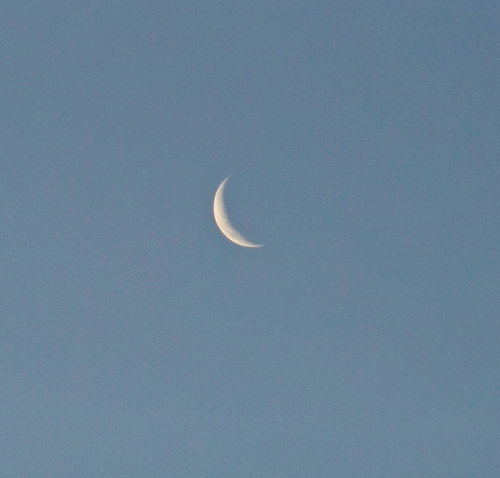 {Is it just me or it is common that people test the zoom function by taking a photo at the moon? :P}

Since the picnic was in the evening (starting from 6.30pm to 8.30pm), I have been loving the SUNSET smart mode. Think of it like the instagram filter but the effect is more subtle. This particular mode is helps to emphasise the sunset by making the colours more intense. 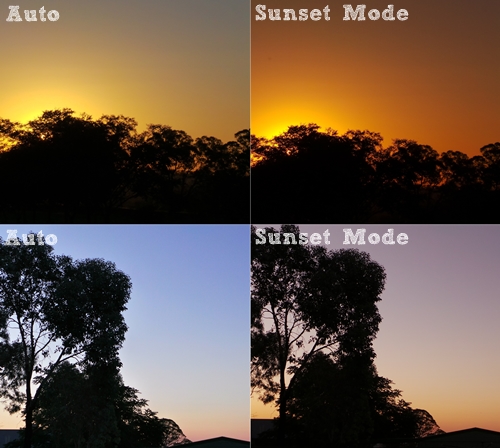 I am also intrigued by its Rich Tone smart mode where it takes and merges pictures in various exposures to create soft and rich colour. The effect is definitely subtle with this one…but noticeable at the same, no? 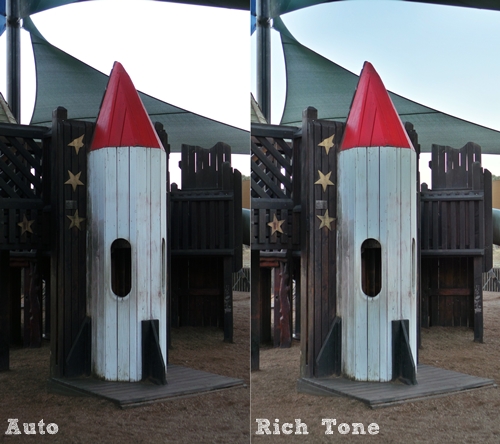 What I didn’t like about this camera was the battery life. Unfortunately with a 3G connection, a great screen and all this amazing software the battery life is not as good as other point and shoot cameras I have used. It is about on par with my phone though, and can last you probably half a day of constant use. If you’re travelling make sure you bring extra batteries!

Overall this was a great camera with many useful features which I found really useful. 🙂

Oh wait, you aren’t leaving without the amazing-and-easy-to-whipped-up cold peanut noodles recipe!  If you and your guests aren’t allergic to peanuts, I highly recommend this dish as one of your picnic food. 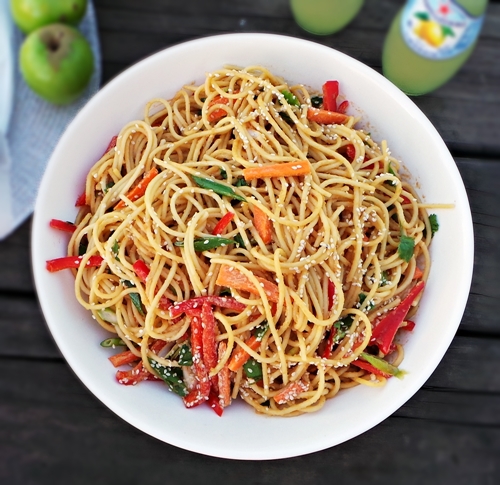 What you’ll need for 4 servings:-

Cook spaghetti according to the packet instructions in salted water. While waiting for the spaghetti to cook, you can prepare the vegetables.  When the spaghetti is al-dente, reserve about 1/4 cup of the pasta water before draining the  water. Rinse the spaghetti under cold running water and set aside. Add the prepared vegetables and spaghetti into a large mixing (or salad) bowl.  Toss gently to ensure the vegetables are nicely distributed amongst the spaghetti. Set aside.  In a measuring jug, mix all the dressing ingredients EXCEPT FOR THE WATER until well combined. Then slowly incorporating the water into the mixture until the texture is a little loose (so that it is easier to mix with the spaghetti and vegetables). Using a pair of tongs  and a fork, mix in the dressing with the spaghetti-vegetables mixture until well combine. Sprinkle with sesame seeds and black pepper. Store it in the fridge until you are ready to serve.