Sorry if I have disappointed you but this is not a post on how to turn your date sexy and sweaty. I do try to keep my blog PG-13 rated you know. 😉

But for me I call it the Chinese fondue. For most people, chocolate fondue is the first thing that came to mind. But instead of the luscious decadent melted chocolate, you’ll get chicken broth; instead of the vibrant strawberries, banana bread and pillowy marshmallows, you’ll get the vibrant green of chinese vegetables, fish and meatballs and the pillowy tofu. Japanese called it shabu shabu, some Chinese call it a hot pot and for Malaysian Chinese, we call it steamboat.

FYI – despite its name, no boat is involved in this culinary experience (so there is no eating on the boat, under a boat or with a boat). 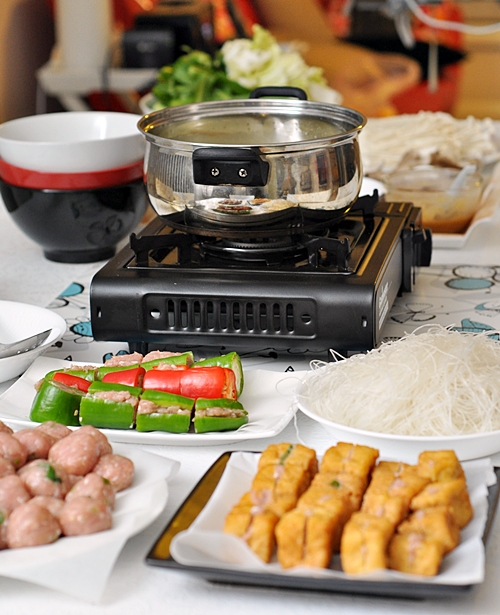 {The Setup – the table settings for steamboat. I like to section my vegetarian ingredients on one side and the meat stuff on the other. And the soup on top of a portable gas burner/electric burner in the middle.}

{Portions are for 4 people}

Process #1 – Make the broth because it requires time to allow the flavour from the chicken to infuse the broth.

What you’ll need for the broth are:-

Note 2: Only if you want to speed up the cooking process. Otherwise, tap water is fine.

Instead of going through the process of making clear chicken broth, you can buy pre-made soup base in a packet (which is meant for steamboat/hot pot) from the Asian supermarket. I have never use it before so I can’t tell you if it’s going to be good or not but I know some of my friends use them and it saves them the hassle of making soup from scratch. 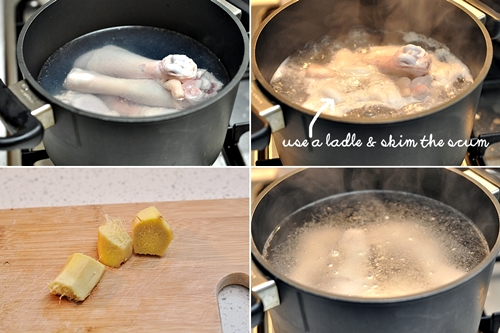 (1) Use the largest pot you have, wash the chicken drumsticks under running tap water and drained. Add recently boiled water and cook over high until it boils, uncovered. (2) Use a ladle to skim the foamy scum. You will have to let it boil fairly vigorously as it makes the scum-skimming process a lot easier (i.e. the scum will stick together) at the same time, be careful it doesn’t overboil. You have the skim the scum a couple of times until the soup is pretty clear. (3) Add ginger into the soup and let it simmer over low heat for 1 to 2 hours. Keep topping up with water to get a full pot of soup. Season with salt and 2 tbsps crispy garlic and its infused oil (see below) after the cooking time.

Note – I allow the soup to simmer uncover while preparing other things for the steamboat. I reckon I simmered the soup for a good two hours.

{My secret ingredient to make a flavourful clear chicken broth.}

(1) In a small saucepan, add oil and garlic. (2) Over medium heat, fry the garlic until it begins to sizzle. Reduce the heat to low and let it fry until crispy and golden brown. Remove from heat and set aside.

TO BE CONTINUED… (with the side dishes and how to make you own dipping sauce) – Part 2 is now up! 🙂

« Beef Fajitas Quesadillas
How to steamboat {Part 2 of 2} »