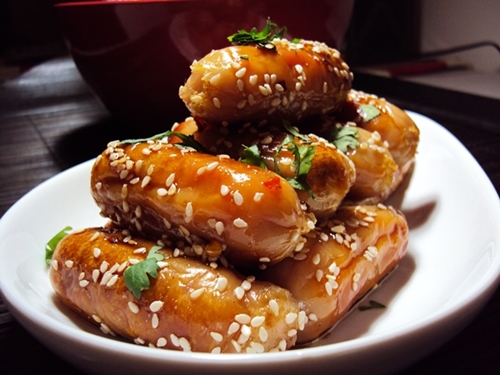 The sausages were suppose to be our breakfast on the next day. Due to the sudden change  of  dinner plan,  I have decided to deploy my breakfast sausages a meal early by making turning them into sesame glazed sausages.  This recipe is inspired by Nigella Lawson’s cocktail sausages recipes and believe me, this make a wonderful side dish. 🙂

2. Mix together oyster sauce, sesame oil, golden syrup and chilli flakes in a bowl. Set aside.

3. Places the sausages on baking dish and cooked in the oven for about 20 – 30 mins in the oven or until the sausages are cooked. (Emily’s note: it is important that the outer layer of the sausages is not overly brown as they are going to further in the next step.)

4. Pour the oyster sauce mixture onto the cooked sausages and mix well. Sprinkle the sesame seeds on top before the sausages are put back into the oven to cook for further 10 minutes or until the mixture starts to caramelized. (Emily’s note: By having the sesame seed on top, it will be like toasting the seeds so it is important not too overly mix the seeds with the runny mixture to ensure they are nicely toasted!)

« You can mess with recipes but not WordPress!
Pandan Sponge Cake with Shredded Coconut Frosting »