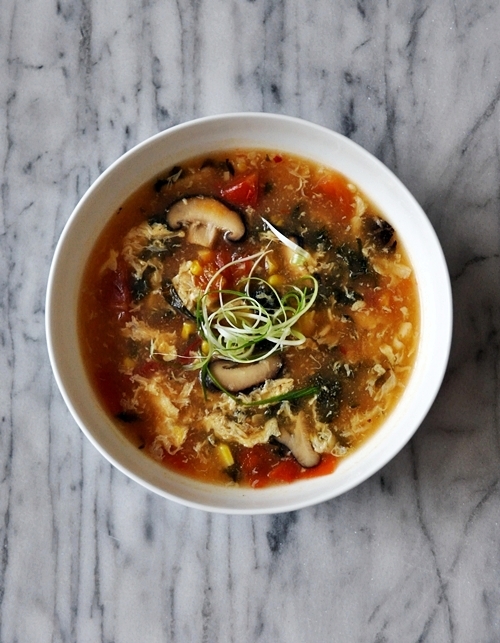 My beloved is a fan of  Chinese restaurant styled soups. Chicken and corn soup and hot and sour soup are on top of his list. I know it’s very “spendthrift” of me to say that I don’t believe in spending money in ordering soup in a Chinese Restaurant unless it is herbal soup. In my personal opinion,  it is only made of broth +  cornstarch + beaten eggs which can be made at home easily, at a fraction of the cost.

(Having said that,  in the name of love, we will order them from time to time, after all they are my beloved’s favourite.)

Last night, I’ve concocted an improvised version of hot and sour soup. Instead of vinegar, fresh tomatoes were my sour agent.  A little of chilli flakes for the hot factor and shiitake mushrooms, soy sauce and sesame oil as the flavourings. Adding kale maybe an unusual touch for hot and sour soup, but I’m surprise how hardy kale is in soup. I actually enjoyed the “braised” texture of kale. And this is  a confession from a kale lover to another.  🙂 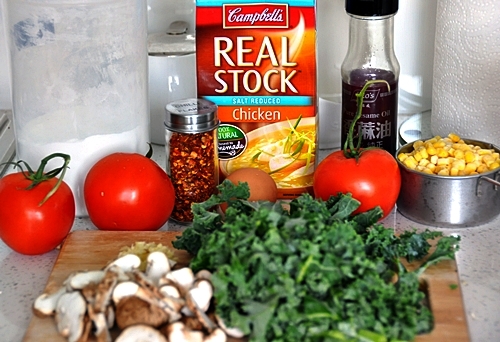 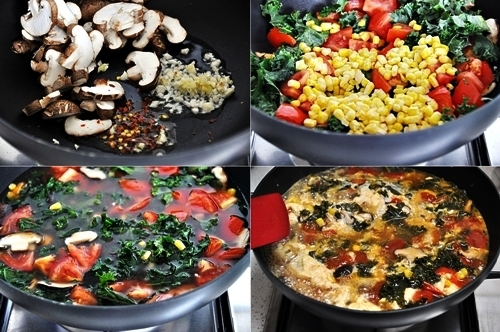 In a large pot (or a wok), heat up a tablespoon of cooking oil and then add mushrooms, garlic and chilli flakes. Saute over low heat until the garlic becomes aromatic. Add kale, tomatoes and sweet corn and stir to combine with the fragrant ingredients. Pour the broth into the vegetable mixture and let it simmer with a lid on over high heat until it starts to boil. Turn the flame over to the low and simmer for another 10 minutes after the broth reaches its boiling point. In the meantime, mix the cornstarch with cold water. Remove the lid. Over high heat and the soup is bubbling vigorously, add the cornstarch mixture and stir to combine with the soup. The soup will thicken as it boils. Keep it boiling until it reaches your desired consistency. Then gradually pour the beaten eggs into the soup in a circular motion (rather streaming the egg in one spot). Allow the eggs to be fully cooked before you start stirring the soup. This is to ensure the eggs do not cloud the soup and they should appear ribbon-like. Stir in the sesame oil, soy sauce and white pepper. Serve immediately. 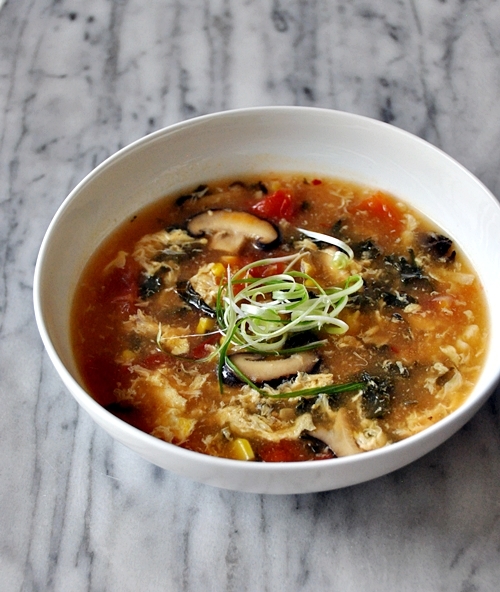