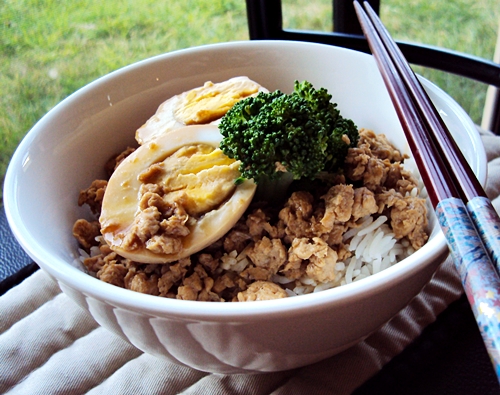 This is one of the popular Taiwanese cuisines called ru rou fan (Chinese translation for salted pork rice). Neither am I from Taiwan nor have ever visited the place, my knowledge about the Taiwanese cuisines is mostly sourced from my former housemate (who is also a foodie himself) and the local variety shows.

I remember the majority of our conversation revolved around food (no surprise there!) and he often expressed how much he misses the food back home. For some time, I was under the impression that he misses his mum’s cooking but it was later revealed that he actually misses the street food in Taiwan. I was enlightened by the fact that not many Taiwanese do home cooking anymore as they are surrounded by cheap and healthy street food. In fact, I was told that some new apartments don’t even come with kitchens anymore.

Hmmm… I think a foodie would love his/her kitchen too much to give in to the temptation of being surrounded by cheap and delicious street food, no?

It is quite puzzling that I can crave for something that I never had before. Either my dear friend is doing a great job in promoting his national cuisines, or it has something to do with me being a glutton? I happened to come across this easy recipe while roaming around Youtube videos.

The thing that draws me to this recipe is the ingredients used in this dish are easily obtained from my local grocer and it does not require much chopping and mincing. How good is that? Although the original dish calls for pork mince (with a ratio of pork fat and lean meat), I’ve changed the recipe by using chicken mince due to dietary reasons.

(p/s: Here and here are where I got my recipe from. Just so you know that the videos are in Chinese, in case you’re faced with lost-in-translation moment.) 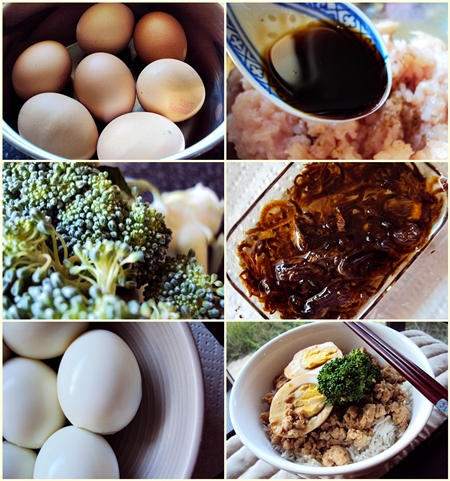 Some sugar to taste

Your choice of veggie as a side dish, blanched. (I used broccoli)

1. To marinate the minced chicken, combine 1 tbsp of soy sauce and five spice powder with the mince. Set aside for 15 to 20 minutes.

4. Add in hard boiled eggs and 2 cups water (or enough water to cover the eggs) and let it shimmer on low heat for 20 minutes or until the eggs become light brown as a result of absorbing the gravy. Taste the gravy to make sure it has the right balance of saltiness and sweetness. Add in sugar if it is too salty. Some people add in rock sugar at the end so that the meat will appear glossy.

5. Finally, stir in the constarch mixture. While doing this, make sure the heat is on high and the sauce is bubbling away. When the gravy starts to thicken, it is ready to serve. I would very much prefer to serve with rice but I think it’ll work well with noodles too. Enjoy!